Citrus and chicken. I mean how can you go wrong? I can't resist Duck a l'Orange or roasted chicken with oranges, so stir-fried Spicy Orange Chicken seemed like a logical choice for a stir-fry.  The recipe is from the wonderful  Stir-Frying to the Sky's Edge by Grace Young. 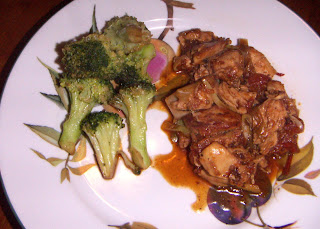 "Smells delicious, sounds dangerous."  That was my husband's first comment. This time I had the wok hot enough for a loud sizzle. The recipe was delicious and once again, I got to shop at my favorite local Asian food market to find the white peppercorns and chili bean sauce.  I also used some homemade chicken broth that I had in my freezer.  That in itself is a rare occurrence. I usually don't freeze left-over soup; I just make my family eat again later in the week.

I didn't use the Szechuan peppercorns. Somewhere in my house is a rather large bag, but I couldn't find it. Oy. Instead I used just about double the amount of the white peppercorn. We missed that light tingle, but the dish did have a kick to it. Next time, I would be tempted to add more orange zest. Maybe the orange was too small or not quite in season?  I really like a pronounced citrus flavor.

I still have a ways to go in the technique department. I still feel like I'm running a race once the stir-frying begins. In this particular case, I think I had too much liquid and the dish was soupy, although the chicken was still tender and tasty.

A group of us are stir-frying together and we're open to any and all who want to join. You can check out Wok Wednesdays or the Facebook page.

Years ago, when I was just developing an interest in cooking, I bought a wok along with a beginners' Chinese cookbook.  I marveled at the recipes presented in order of difficulty. I don't know why, but I never, ever made any of the dishes from that book.  Instead, I used the wok to make vegetable tempura and omelets. What possessed me? Who knows? As I recall, the omelets came out quite well.  These days I'm happy that I now include stir-fries in my repertoire.

This week's recipe is Stir-Fried Eggs with Tomatoes. I was really pleased that I had most of the items on hand from the ingredient list.  I substituted fresh basil for the cilantro; we're not big cilantro fans and my basil plant is still producing.  I also used onions instead of shallots because I had them on hand. 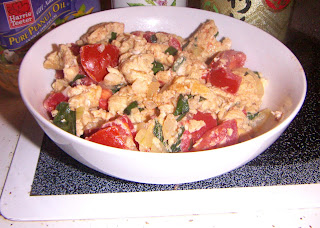 I decided that in case we didn't like the recipe, I should make a second dish.  I made mu shu vegetables using tortillas as the pancakes. The recipe was adapted from Millie Chan's Kosher Chinese Cookbook.    I spent about 30 minutes, laying out all the ingredients for both recipes and then started stir-frying.  Everything went great. The only point I started to worry was when I put the eggs into the wok and they just sat there. No fabulous sizzle. No hot bubbling eggs.  I stood there for a moment and then started mixing from the bottom of the pan up. In the end, it all came together.  The garlic and onion gave the eggs a nice crunch and the basil and sesame added flavor.

This recipe is from Stir-Frying to the Sky's Edge  by Grace Young, a book well worth adding to your cookbook library. To find out how others enjoyed this recipe, check out the Wok Wednesdays  site.
Posted by Judy at 3:33 PM 2 comments:

Well it's been a while since I've baked and blogged. I unexpectedly found a new career as a teaching assistant at a pre-school. Eventhough I work part time, I arrive home exhausted from running around after 10 two-year-olds.  Once a week, I cook with three and four year olds.  That is really fun.

Now that I'm used to my new schedule, I'm back with Tuesdays with Dorie.  This time:
Cranberry Walnut Pumpkin Loaf. Our host is Rebecca.  The recipe will be posted on her blog.
I have to confess to being a bit intimidated by this recipe. There is a very long set of instructions and the recipe calls for two rise times, an overnight in the fridge and  a six hour rest (okay, actually a 3 to 4 hour rest, but there was a small misunderstanding between the instructions and me.)  I then looked at the small 5.5" x  3.5" pans and thought, "All that time.... and that's what we end up with?"  I ended up having enough dough for four small loaves. 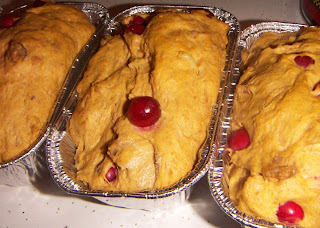 I'm not sure I will make this bread again. It has a lovely texture, but the pumpkin flavor is very subtle and the frozen cranberries I used were too tart. Maybe I was just expecting something sweeter.  Given the time commitment to make this bread, I might perfer to make a cinnamon raisin loaf or a challah.  Come to think of it, a friend of mine has a recipe for pumpkin challah bread ... 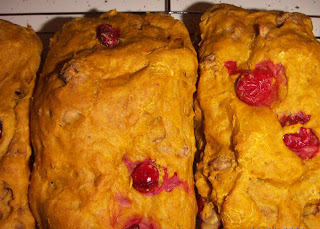