Our second entry for Baking With Julia: Chocolate Truffle Tartlets. Yum. You can find the recipe on pages 382-383 of the book or you can check out our hosts' blogs: Spike, Jaime, Jessica and Steph. (Apologies to Steph of "A Whisk and a Spoon" -- the link doesn't seem to copy to my blog.)

There are two recipes, both by David Ogonowski. First you make the dough for the tarts. Reading through the recipe, I had a serious case of food-processor envy. To say this is a "hands on" recipe is putting it mildly and I had my doubts. I usually avoid making pie crusts with butter for the very reason that it seems that the butter and flour will never reach the size of small peas. Eventually using fingertips, a dough scraper, two butter knives and rubbing the dough between both palms, I got the butter mixed in with the other ingredients.   After chilling it, it rolled out like a charm.
In the end however, the dough turned out to be a bit dry and they shrunk a bit in the tartlet pan. I'm not exactly sure where I went wrong. Maybe the oven temperature was too high, maybe I left them in too long. 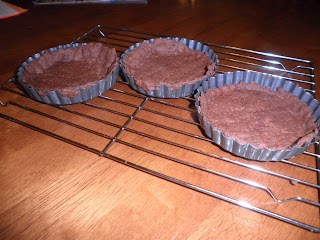 The filling came out like a dream; very rich and full of chocolate flavor. Although, I must invest in a metal bowl for melting the chocolate. I had to balance a small pan on top of a larger pan instead. Waiting for the chocolate to genly melt, I couldn't take my hand off the pan lest it fall.
I didn't use biscotti, but the tarts still had a nice crunch from the chocolate bits. This is just about the fanciest desert I have ever made and it was a perfect ending for our Valentine's Day dinner. 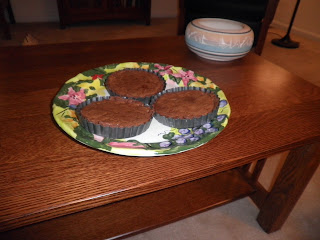 Okay. So what is a Spiderman Cupcake?  In this particular case, they happened to be Red Velvet cupcakes with cream cheese frosting and Spiderman decorations. 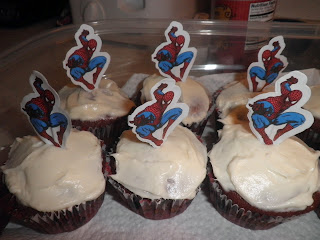 After receiving A Baker's Field Guide to Cupcakes by Dede Wilson as a gift, my younger daughter, Mia started baking cupcakes for her drama class at school. She baked a double batch of the red velvet cupcakes for the dress rehearsal of a one-act play she is directing.  The recipes she used can be found on pages 42, 20 and 29 of the book.

My role in all of this was to purchase the ingredients. Is it my imagination or has Dutch processed cocoa disappeared from grocery store shelves?  I went to five of the major chains in our area (Kroeger's, Harris Teeter, Food Lion, Farm Fresh and Trader Joe's) all to no avail.
Frankly, I didn't even know there was a difference between Dutch processed and just plain cocoa.  Neither, did the grocer at Food Lion. The grocer at Harris Teeter explained that Dutch processed is more expensive and since consumer's aren't familiar with the brands, they don't buy it. Therefore, no more Dutch cocoa on the shelves.

Mia substituted regular cocoa which seemed to work out fine. In fact, not one of the 32 cupcakes were left over.
What was left over was cream cheese frosting, about 6 cups worth. We didn't pay attention to the fact that the recipe makes four cups so there was no need at all to double it. Oh well, there's nothing to be done for it. We'll just have to bake a carrot cake.

BWJ: Up first, White Loaves hosted by Laurie and Jules.

This is just what I enjoy in a recipe; a short list of ingredients, challenging, but not daunting, forgiving of mistakes and most importantly, a delicious result.
I go through periods of baking bread, but they are few and far between. My first effort was in high school with a friend who was a more experienced baker than I. We made an African cardomon bread from one of the old Time-Life international cooking series.
Since then, my bread baking activity had been inspired by, among other events, the purchase of a food processor, a snow storm, challah and bagel baking classes taught by our Rabbi, and moving to Southeastern Virginia and not knowing where to get good challah.


As I mentioned, the White  Loaves are most forgiving. In defrosting the butter in the microwave I melted half the butter. The dough was very wet, but this seemed not to affect the end product. I also added the salt rather late in the process and that made the bread noticably salty in places, but not too much. Finally, I only have one bread pan that is 8.5" x 4.5" so I used that and a larger pan. I actually liked the loaf that was baked in the larger pan. Still, my family appreciated the results and who could ask for more?